I'm an incurable hobby coder. The rate changes depending on what's happening at work, but it never stops completely. Even during 2018, when I left Hipmunk, joined Asana, and got married, I made:

The year before that was similar:

I used to throw up my hands once in a while and say, “It's all too much! I have to slow down!” But I don't slow down. So now, instead of trying to slow down, I'm trying to understand myself better and make decisions about what I work on more consciously.

My projects break down cleanly into the categories defined by the contents of my ~/dev directory:

The apps and games are ephemeral: I release them and move on. The libraries are benignly neglected, with patches getting merged quickly and releases going out sporadically. For example, I used to work on Literally Canvas a lot, but now all I do is merge pull requests and close the occasional GitHub issue.

Of all the subdirectories of apps/, games/, and libraries/, 75% have been shipped to “users” in some way as itch.io uploads, App Store apps, PyPI/NPM packages, or live web sites. Every single one has a bitchin' README.

Another way to look for patterns is to identify what's absent. There are no major contributions to third party libraries made in my spare time, though there are a few small ones. There are no Project Euler solutions, or any other “algorithms for fun” exercises. I don't use difficult-to-learn languages. And I haven't written any libraries that weren't an important building block for something else.

For most projects, I can identify the thought that made me start. Those thoughts fall consistently into two buckets. Either I'm doing a game jam with the intention of making something better than what I made for the last game jam; or I have what I think is a great idea that needs to exist, and I think I'll do a great job at making it happen.

The first bucket hasn't resulted in any stress or heartbreak. I make a bit of art and move on. The second one has all the problems. Here's why: 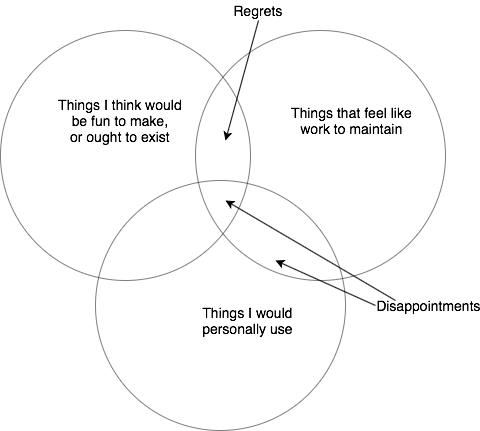 Some hobbyist programmers feel like they can never finish anything. I'm the opposite: I don't drop a project until it's “released” to some degree.

Too many times, I implement a set of neat ideas, but it doesn't feel like an accomplishment unless I commit to spending more energy than I have left. That's how Computer Words ended up. Literally Canvas was at least successful, but I still feel some ongoing guilt for neglecting it or even failing to rewrite it from scratch for the modern JavaScript ecosystem.

Here's how I want to think about starting these kinds of projects in the future: 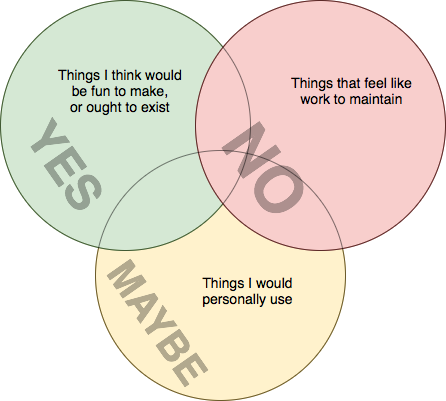 Or, in “mission statement” form: