Discovering this forgotten piece of my awkward and enthusiastic past sent me down a rabbit hole of past-self discovery. I got most of my early games running in Basilisk II, a 68k Mac emulator, and successfully guessed the passwords to my old web hosts so I could download all the files. This post will focus on the sites themselves; later on I'll dig into the apps and games. I already did a bit of that on Twitter, but I think it's worth collecting it all in posts, just for my own sake.

Most of the home page is full of irrelevant updates. At the bottom is a list of links to other pages, and this animated toaster:

The rest of the pages follow a familiar throw-everything-at-the-wall approach of a kid making their first web site:

(In Autoarchaeology Part 2 I'll look at what I found on those download pages.)

Naturally, nothing on “Coming Soon” ever came…

Here is where you see what is coming soon to this site. Duh.

This will probably be my best game yet. It will be an RPG where you are walking through Bill's base trying to find him so you can bring him back to your planet and Macs will rule the universe once more. The graphics will be better than in Save the CLD and Destroy the World. I warn you, I may never get around to finishing this.

Probably won't get around to these...

If you've got Escape Velocity and you want to wipe out Windows, then this is the plugin for you. There is a system called Mac Territory surrounded by the Mac face. But I can't get the Mac Armor outfit to work, and the Windows part isn't made yet. I probably won't finish this one or the Animorphs plugin either.

Please e-mail me with any questions, comments or suggestions you might have.

Some of the links are still active. Lissa Explains it All is still around. “AppleWorks” just links to apple.com. But internet4kids.com, kidsdomain.com, and javagameplay.com are domain-squatted now, and the rest of the links are just dead. All the references to “Cocoa” are for a game creation program that I'm pretty sure Apple bought just for the Cocoa name; it's unrelated to the modern Cocoa API. But I've used both, so I guess that means I've come full circle. :–)

At some point in 2001, I decided that imaciscool.htmlplanet.com was not a good enough URL for a totally legitimate purveyor of software like myself. So I started to parrot shareware culture more seriously, and moved to stratus.iwarp.com, home of “Stratus Software,” the extremely respectable establishment where you can download very good video games. (I had recently written a report for science class on clouds.) Within a couple of years I changed it to “Diordna Software” (see earlier post Usernames) and eventually gave it this amazing logo, made in a 3D program distributed for free with a MacAddict CD:

At stratus.iwarp.com, you can see an even longer list of irrelevant updates, and a minor evolution of the original site content:

I rendered all the MIDI files to WAV and uploaded them to SoundCloud. I might give a couple of them a proper mix eventually. It would be a nice complement to Salvage Operation EP!

Over time I got a little better at making games, a little better at making web pages, and a little better at self-editing. The next iteration of the site, silvernetwork.net/diordna (2004), had a similar structure, but was a little less background-imagey. When someone in the little Mac indie game dev scene I was in started handing out subdomains on macintoshdevelopers.net, I started over with my new CSS skills and made diordna.macintoshdevelopers.net (2004-2007). When I finally bought my own domain, thebiggerbox.com (2007), I ran WordPress and made a custom theme. But “The Bigger Box” didn't last long; I picked up steveasleep.com at the end of 2008, and it slowly converged on what you see today at steveasleep.com.

A couple days after I wrote this post, I found an even older version of the site using the site admin tool. 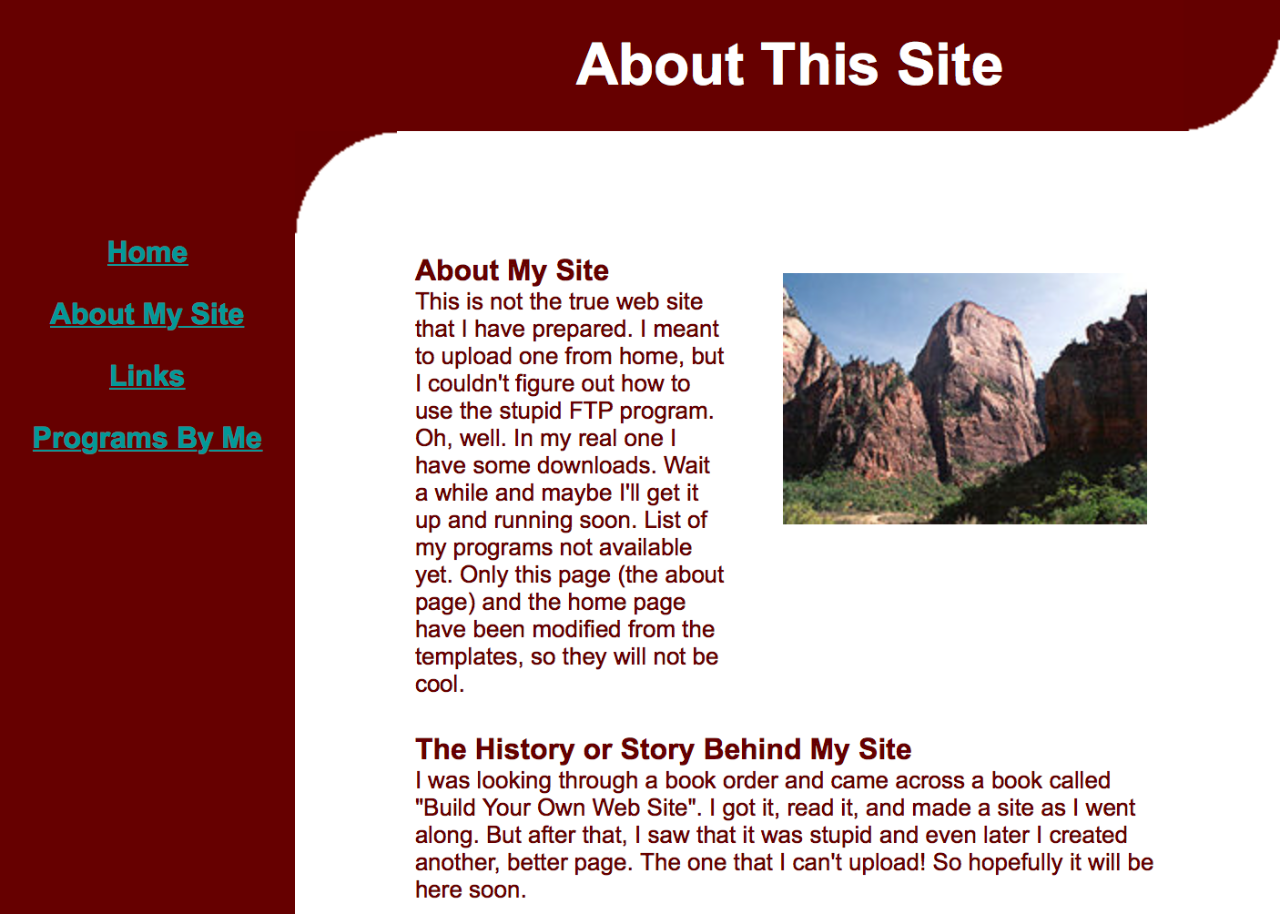 This is not the true web site that I have prepared. I meant to upload one from home, but I couldn't figure out how to use the stupid FTP program. Oh, well. In my real one I have some downloads. Wait a while and maybe I'll get it up and running soon. List of my programs not available yet. Only this page (the about page) and the home page have been modified from the templates, so they will not be cool.

The History or Story Behind My Site

I was looking through a book order and came across a book called “Build Your Own Web Site”. I got it, read it, and made a site as I went along. But after that, I saw that it was stupid and even later I created another, better page. The one that I can't upload! So hopefully it will be here soon.

It has a list of all the “games” I had made that I thought were worth mentioning as of December 21st, 2000:

Super Dude The alien politicians from mars are trying to become president of the United States. You must stop them!

Race Alley Race to the top of the screen while avoiding obstacles. Requires a screen size of 1024 x 768

Bombs! Avoid the falling bombs or shoot them.

Beamer Beam up Earthlings from your spaceship.

Save the Cute Little Doggy In this game you do just as the name suggests!

Destroy the World In this game you destroy the world!

CityGunner Shoot the bombs before your city is destroyed or before you are destroyed.

StephenEdit Make your own web pages with this HTML editor.

SuperCalc Calculator so great that my mom uses it instead of the system calculator!

In the future, when my real site is up, all of these programs will be available for download for Mac users.